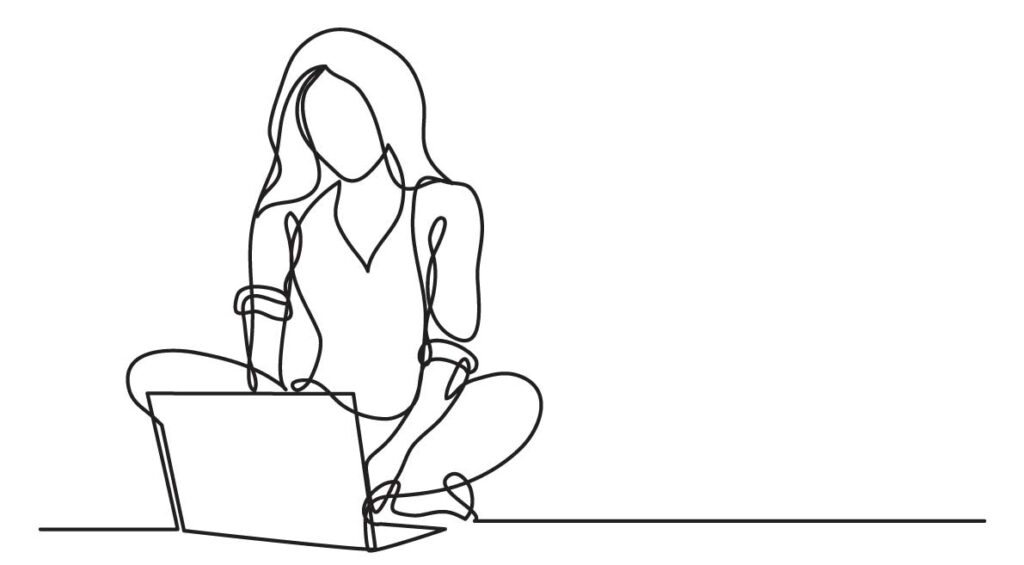 Plasminogen is a protein that is produced in the liver, and functions throughout the body as part of the blood clotting system. Its primary role is to break down fibrin, the substance that creates blood clots. If there is not enough functional plasminogen available, fibrin can accumulate after injuries as part of the wound healing process. Interestingly, medical researchers have not observed a relationship between PLGD and the development of blood clots in affected patients. Patients with PLGD often develop excessive growth of fibrin (called fibrin membranes) on mucosal surfaces, and can have trouble with normal wound healing (see Symptoms).

Due to the rarity of PLGD, there is much that needs to be learned to improve the care of those affected. One issue is that physicians are currently unable to predict each person’s clinical course, meaning they cannot predict if and when a person might develop symptoms, how long those symptoms might last, and if they will recur. There has not been a relationship reported between the plasminogen activity levels and development of clinical symptoms, or a relationship between symptoms and the genetic changes that result in PLGD. Another issue is that, presently, there are no specifically licensed therapies to replace plasminogen which is the best method to treat this type of clotting factor deficiency. Once these therapies are available, we will need further research to understand their best use for each person with PLGD. 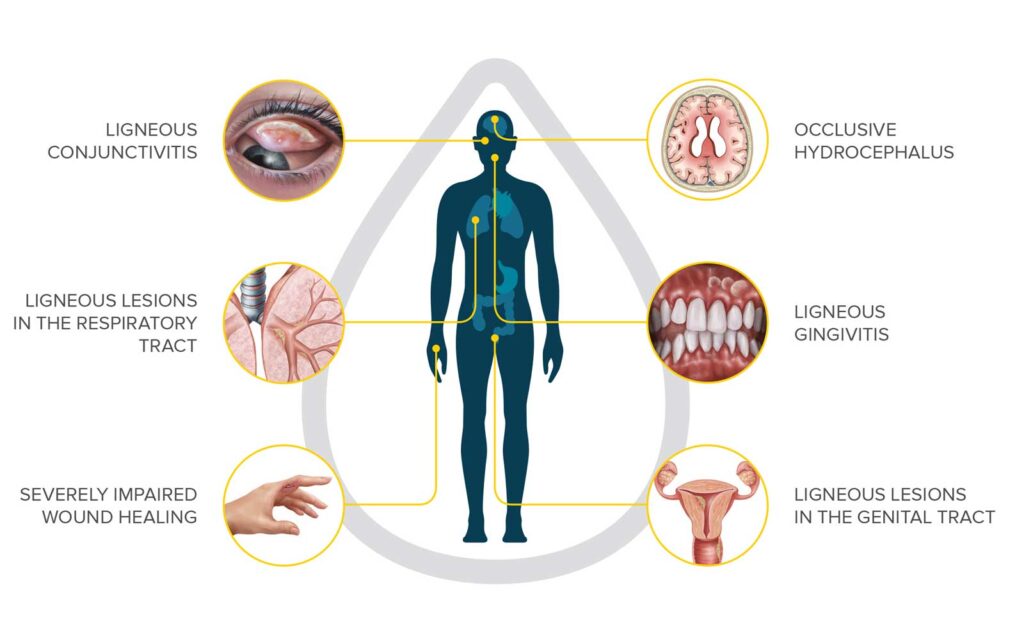 Symptoms of plasminogen deficiency (PLGD) are due to an accumulation of fibrin, a protein involved in the blood clotting system.  Individuals with PLGD have too little of the needed normal plasminogen activity to help regulate and dissolve fibrin once formed. Accumulations of fibrin membranes usually occur in areas that have linings called mucous membranes including the eyes, ears, nose, mouth, airways, gastrointestinal and genitourinary tracts, and less commonly, the central nervous system. These abnormal membranes are called “ligneous” because they are “wood-like” in their appearance and can affect the normal function of the involved organ.

PLGD lesions often appear after minor injury or infection (pink eye, ear infection, or tooth eruption, for instance), but may also appear without injury. These lesions often re-grow quickly after they have been removed. The most severe symptoms are often observed in children but may appear at any time in a person’s life. PLGD is a lifelong disorder that appears to affect females in terms of clinical manifestations more than males. Woman with PLGD may experience painful intercourse, abnormal menses, and infertility (ref 4,5). 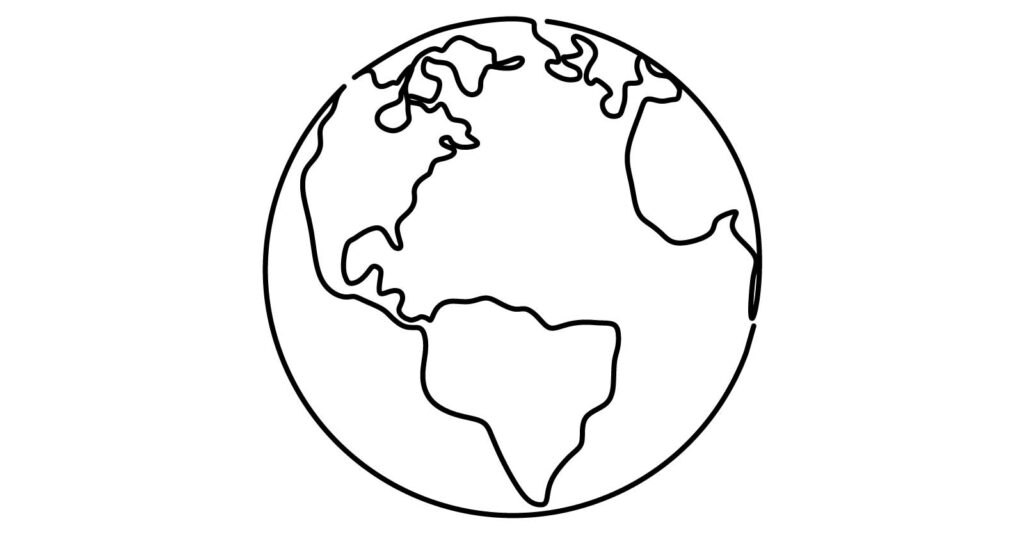 Congenital plasminogen deficiency (PLGD) is inherited in an autosomal recessive fashion due to mutations on chromosome 6. Many different mutations have been identified in type I deficiency, and in affected patients mutations can be compound heterozygous or homozygous. The specific genetic mutation is not currently known to predict the development of symptoms or severity of disease (ref 1).

PLGD is very rare genetic disorder estimated to affect 1.6 per 1 million persons (ref 3,4). The true prevalence may be under-estimated because the symptoms can present in a variety of ways to many different types of healthcare providers (ophthalmologists, dentists, ENT physicians, gynecologists, etc), and may not be recognized as a symptom of plasminogen deficiency.

The diagnosis of PLGD is challenging, for a variety of reasons. Affected individuals may present to different types of physicians including their general medical doctor, their dentist, or specialists such as an ophthalmologist, ear-nose-and throat doctor, lung doctor, etc. As PLGD is a very rare condition, it is unlikely that these physicians have personally seen someone with PLGD, or learned about this rare deficiency during their training. This often delays diagnosis and prolongs the time that affected individuals endure their symptoms. Once the cause of the symptoms has been identified, the ability of physicians to identify specialists who can help treat and guide therapy may be difficult.

Surgical removal of lesions usually results in regrowth which can be rapid without appropriate medical therapy, and can contribute to long-term scarring and organ damage. Patients should minimize any surgical procedures, including surgical membrane removal, unless lesions become life threatening. Even then, surgical procedures should be done under the guidance of a physician who is knowledgeable about plasminogen deficiency (see Patient Resources for a list of recommended PLGD treatment centers).

Unfortunately, current treatment options are limited and inadequate. Many non-specific treatments have been reported in case studies and series; however, these treatment options have inconsistent efficacy and do not address the underlying deficiency state. Fresh frozen plasma (FFP) has been reported to have success in some cases when used systemically (injected into the veins) (ref 1) or when prepared as eye drops or given as an injection into the subconjunctival area (ref 2). FFP has a low concentration of plasminogen and often must be given repeatedly over a period of time to increase the plasminogen activity level and improve symptoms. Additional complications of FFP administered intravenously can include allergic reactions to other proteins in the FFP, or volume overload with difficulty breathing, and in rare cases, heart pumping issues.

Investigational plasma-derived plasminogen concentrates have shown clinical success when formulated either as ophthalmologic drops (ref 3) or as an IV concentrate (ref 4). The patients in these studies have generally shown excellent clinical progress, resolution of nearly all lesions and return to normal organ function, and very low rates of side effects. These concentrates are not yet commercially available, but once accessible by all patients, will dramatically change the experience of living with PLGD for the better.

Have you or a loved one been newly diagnosed with plasminogen deficiency? It can be a scary, confusing time, but you are not alone. Start with this resource.

Talk to Your Physician about PLGD (PDF file) – Coming Soon!

Plasminogen deficiency is a rare disorder that few physicians are aware of. You can download or print this resource to help your physician understand your unique needs as a PLGD patient.

Plasminogen deficiency is not the same as hemophilia; yet the same doctors, called hematologists, who treat hemophilia, are also the experts at treating PLGD. Some hematologists work in centers called Hemophilia Treatment Centers, or HTCs, where they can provide care as a team alongside pharmacists, social workers, career and school counselors, child life specialists, and insurance specialists. Choosing an HTC gives you a medical home, coordinated care, and assistance with the many life challenges that patients with PLGD will face. Find your nearest HTC here:

The physicians, nurses, and other healthcare providers who treat PLGD patients are essential to our mission of improving patients’ experiences and outcomes. This section contains information and links to help healthcare professionals most effectively treat PLGD patients. Please also consider signing up for our newsletter to stay up-to-date on the latest research, treatments, and clinical trials available for PLGD patients.

Not all laboratories perform plasminogen activity and antigen tests needed for an accurate diagnosis. We are aware that Esoterix as a national laboratory has the capability to perform both of these tests accurately. Other laboratories may be capable as well. We recommend that the laboratory utilized is confirmed as capable and accurate.

Currently, genetic testing is being performed primarily as part of study participation. Subjects participating in the HISTORY study (see Research) are having their genetic testing done at the Angelo Bianchi Bonomi Hemophilia and Thrombosis Center in Milan, Italy.